A couple of years ago I was approached by Jeff Hoover, from WGN Channel Nine news, to DJ for a Welcoming Party for Ana Belaval, the “Around Town” reporter for the WGN Morning Show. Well, that sounded like it would be very exciting, so I jumped at the chance. There was singing and dancing, and there were a lot of impersonators on hand.

In case you haven’t heard of Jeff, he’s the Segment Producer of the WGN Morning News. He produces, and stars in, those comedy sketches you’ll see during the morning broadcast. END_OF_DOCUMENT_TOKEN_TO_BE_REPLACED 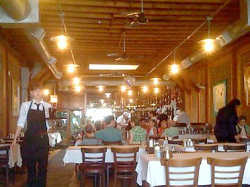 I Just did a party at Reza’s restaurant, 5255 N Clark St in Chicago. It was a small party of 80 guests from Accucare Home Health. They were welcoming the new Director of Nursing as well as celebrating a combined employees Birthday party. I set up my equipment in a back room that they have for this type of occasion.

After eating at the wonderful buffet, it was time to work off some of those calories. They were a little shy to dance in the restaurant at first END_OF_DOCUMENT_TOKEN_TO_BE_REPLACED